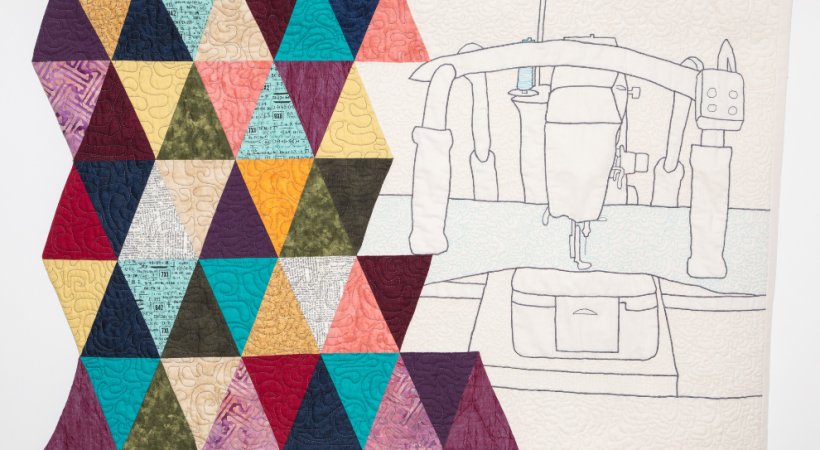 Loretta O’Brien has been involved in patchwork and quilting since 1982 and is a member of the Irish Patchwork Society since 1983.She could always sew (her mother and aunts were tailoresses) but since becoming involved in patchwork it would be safe to say that it has almost taken over her life. Fabrics became her paint, the sewing needle became her brush and she discovered her creative side. She started like all of us do making traditional quilts for her children and friends. Very soon she had more quilts than beds and so began making quilts of topical themes for exhibition. For these topical themed quilts Loretta uses the triangle shape. The repetitive process of piecing them creates a state of tranquillity within her as she works out her ideas. On a trip to Brussels in the 1980s Loretta found a book on the Russian artist Vassili Kandinsky and fell in love with his abstract expressionist work which she feels translates very well into fabric and thread. This fascination with the work of Kandinsky let to her selection to participate in the travelling exhibition Annaghmakerrig 3. Her work has also been exhibited internationally from Europe to South Africa to America. This particular exhibition is the culmination of Loretta’s fascination with the work of Kandinsky but it is also an exhibition of her topical themes work. Loretta likes to teach a little because her greatest joy is to see people become absorbed in learning patchwork and quilting and allowing themselves find an accessible method of expression for their creativity.